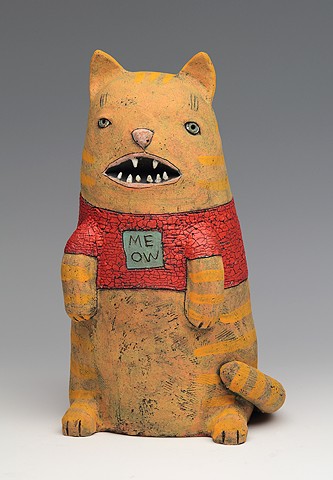 This is one of my Kimo-inspired pieces. Kimo belongs to my daughter's ex-boyfriend and he's a rescue cat with a big head and thick neck. Kimo had emergency surgery which revealed that his intestines were wrapped around his lungs. After surgery he wore a little white t-shirt and his meow went from a nearly inaudible breath to a big MEOW. He was uncomfortable during his recovery, so I thought of him as saying, "Me ow", as in "I hurt". He is a very expressive fellow in his own way. SOLD